April 29, 2021 By Be Alicante Alicante tourism Comments Off

The first edition of The Ocean Race Europe, regatta will start at the end of spring 2021 and will consist of up to five stages.

It is a new event on the ocean sailing calendar, open to VO65 monotypes and IMOCA 60 boats. They will compete for the first time in a fully crewed configuration.

The new competition has an international fleet of IMOCA 60 with ‘foils’ and a complete crew and VO65 monotypes, with various records in its track record, and the innovative IMOCA class, which seems to have no limits. All participating crews will include female sailors in their ranks. The crews will sail from the North Atlantic coast of Europe to the Mediterranean Sea, in various stages from Lorient (France) to Genoa (Italy) via Cascais (Portugal) and Alicante, with three prologue stages in Northern Europe. The teams will sail to Alicante from Cascais in the second stage of the regatta, where they will stop for a few days in mid-June. From the Port of Alicante the fleets will head north for the arrival of the third stage ending in Genoa.

You can see the video of the route here: La Ruta de Ocean Race 2021. 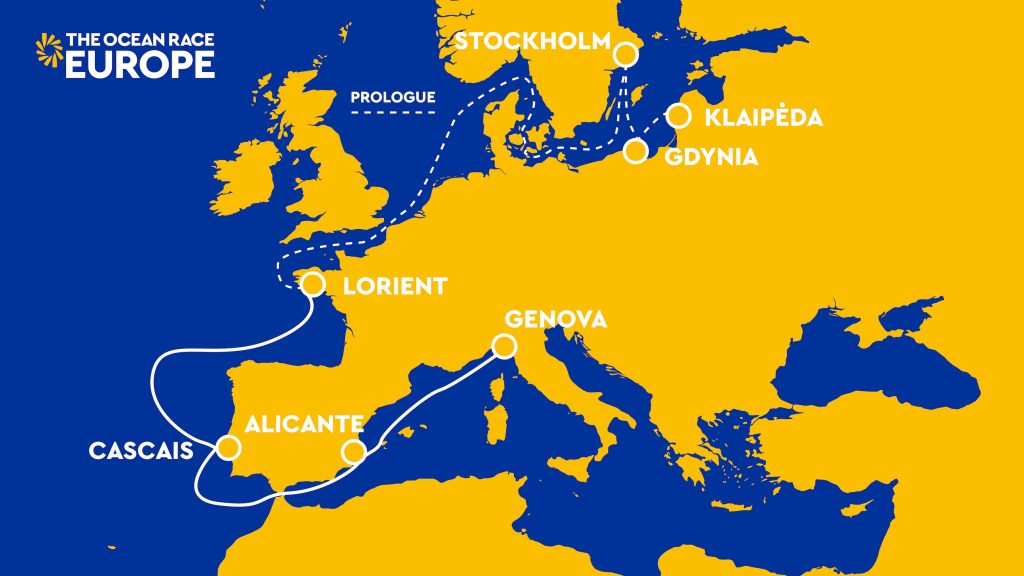 This project  will allow a greater number of sailing enthusiasts to be approached around Europe. The short and intense stages will offer a very interesting competition. In addition, the Ocean Race Europe is a great opportunity to promote sustainability initiatives in the context of a high-level regatta. On land, there will be public activities in each host city, along with promotional events.

Additionally, the work started by the award-winning sustainability program of the 2017-18 edition continues as part of the Ocean Race. The ‘Racing with Purpose’ program includes advocacy, science, education and excellence in sustainable events. As part of the ‘Sports for Climate Action’ program of the UNFCCC (United Nations Framework Convention on Climate Change), The Ocean Race joins forces with the sports sector in the race to achieve net zero emissions by 2030. The Ocean Race Europe will advocate for climate action, telling the story of climate change through a blue prism. This event has also been inspired by the values and spirit of European cooperation and identity, it will in itself be a showcase of open borders.

The organizers will have the health of sailors, teams and the public as a top priority and will respect all COVID19 regulations in all cities visited.

The arrival of the boats  is expected in Alicante, which will host the event The Ocean Race, between June 9 and 10, with departure on June 13, 2021. A local regatta organized with the Real Club de Regatas de Alicante is also planned . The incorporation of the IMOCA class will suppose new challenges and incentives for fans and participants. Through the Generalitat Valenciana and the Sociedad Proyectos Temáticas de la Comunidad Valenciana, Alicante has organized the last four outings of the race and will host the outings of the next two editions scheduled for 2022 and 2026. The Ocean Race Europe will allow continuity to the actions organized in Alicante around the new editions of this mythical global regatta, which takes place every four years.

¿Are you coming and still in the search of accommodation?

¡Stay in Apartamentos Be Alicante y Bed&Breakfast La Milagrosa and anjoy this event in Alicante with us!

This website uses cookies to improve your experience while you navigate through the website. Out of these, the cookies that are categorized as necessary are stored on your browser as they are essential for the working of basic functionalities of the website. We also use third-party cookies that help us analyze and understand how you use this website. These cookies will be stored in your browser only with your consent. You also have the option to opt-out of these cookies. But opting out of some of these cookies may affect your browsing experience.
SAVE & ACCEPT
Abrir chat